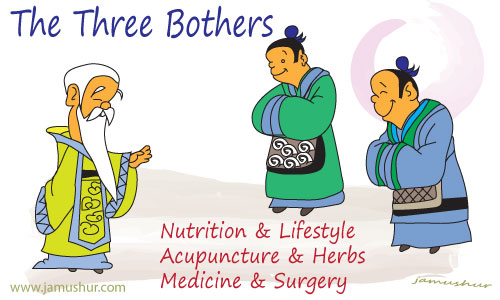 I love this story as it exemplifies how we should view traditional Chinese medicine and the part it plays in the healthcare of oriental peoples for over 4,000 years.

There was a famous Chinese doctor, who lived some 4,000 years ago. He was celebrated for his skills and knowledge of medicine and his ability to heal even the most fatal disease. He cured the emperor’s son who was believed dead, in a miraculous exhibition of his skills. The emperor asked why he was so much better than is two brothers, who were also doctors.

He replied, my first brother heals sickness before it even develops, so his methods and skills appear unseen and he is known only within our village. His practice involves giving advice on food, exercise and lifestyle to keep his patients well. My second brother deals with illnesses while they are chronic or minor, preventing sickness from getting worse and returning the body to health. He cares for his patients through acupuncture and herbs to rebalance them back to good health when they become ill. I treat diseases when they threaten to destroy the person. This requires several medicines, skill and knowledge in their use. For this reason my name has become famous throughout the kingdom, yet I am simply a surgeon who is called upon when all else fails. My first brother has the knowledge to deal with illness before they arise and my second brother is able to treat them at an early stage and prevent them getting worse. Though my fame has spread throughout the land, their knowledge is greater.

The first two brothers is how traditional Chinese medicine works with preventative dietary and lifestyle advice, acupuncture and herbs. The third brother who was the surgeon is how modern western medicine works. Today we need to have all disciplines available to holistically treat the various health disharmonies in people’s lives. Keeping healthy is surely one of the most important elements of a happy life. Before a person becomes ill, we need to treat with appropriate diet, exercise and lifestyle. When a person becomes ill, we need to treat with acupuncture and herbs first and only when these methods are not enough, we should use western medicine which includes surgery and powerful drugs with their equally powerful and harmful side effects.