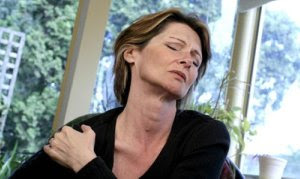 Fibromyalgia is characterised by chronic widespread pain and allodynia (a heightened and painful response to pressure). The exact cause of Fibromyalgia is unknown but it is believed to involve psychological, genetic, neuro-biological and environmental factors. Fibromyalgia symptoms are not restricted to pain, leading to the use of the alternative term fibromyalgia syndrome for the condition. Other symptoms include debilitating fatigue, sleep disturbance, and joint stiffness. Some patients also report difficulty with swallowing, bowel and bladder abnormalities, numbness and tingling, and cognitive dysfunction. Fibromyalgia is frequently accompanied with psychiatric conditions such as depression and anxiety and stress-related disorders such as post-traumatic stress disorder. Not all fibromyalgia patients experience all associated symptoms. Fibromyalgia is estimated to affect 2–4% of the population, with a female to male incidence ratio of approximately 9:1. The term “fibromyalgia” derives from new Latin, fibro-, meaning “fibrous tissues”, Greek myo-, “muscle”, and Greek algos-, “pain”; thus the term literally means “muscle and connective tissue pain”.

Pain is seen as a disharmony and particularly stagnation of the flow of Qi energy within the body. This disharmony of Qi that results in fibromyalgia is usually associated with disharmonies of the Liver, Spleen, Kidney and Heart Systems.

Traditional Chinese medicine does not recognize fibromyalgia as one particular disease pattern. Instead, it aims to treat the specific symptoms that are unique to each patient depending on their constitution, emotional state, location and intensity of their pain, digestive health, sleeping patterns and an array of other signs and symptoms. Therefore, if 10 people are treated with Traditional Chinese medicine for fibromyalgia, each of these 10 people will receive a unique, customized treatment with different acu points, different herbs and different lifestyle and dietary recommendations.

The symptoms of fibromyalgia are highly variable form one person to another, and therefore a wide array of traditional and complementary treatments has been shown to be the most effective way of treating this difficult syndrome. A treatment program may include a combination of psychological or behavioral therapies, medications, exercise, acupuncture, herbal medicine and bodywork.

The Webinar includes material from both Western and Eastern perspectives. In addition to Traditional Chinese medicine being a general medical discipline  it is primarily complementary and part of an integrated approach to healthcare.